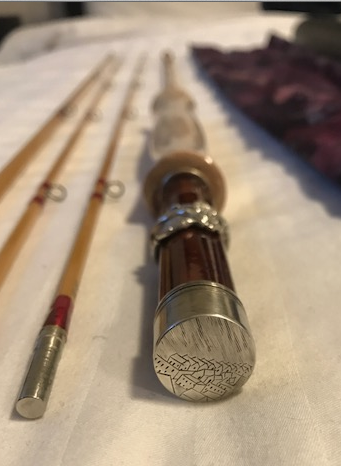 18-6  Bawdy Juneau
5 weight  3 piece 2 tip
The Bawdy Juneau rod commemorates the risqué early history of Juneau.  Alaska’s capital city began as a rough and tumble gold camp in the early 1880’s. Over 1,000 young men stampeded to Southeast Alaska during the period of hydraulic mining following the discovery of gold.  Bars and brothels were soon additions to the gold camp at the foot of Mount Roberts.
Tourism began in 1883 and travelers, bound for John Muir’s cabin in Glacier Bay, rushed to curio shops to buy the recently popularized sterling silver spoons to document their travels. One of these locally carved spoons shows downtown Juneau’s buildings as seen from Chicken Ridge, behind the gold camp. The  carving depicting the row of bars and “ladies of the evening’s” cribs along South Franklin, hard against the mountain, appear on the base of Bawdy Juneau’s reel seat.
The reel keeper ring is from a Victorian spoon graced with a nude. The reel seat is South American bloodwood, topped with a sterling silver ring. Museum quality cork rings were used in the full wells grip.  The winding cheek is machined from an 1890’s period rod ferrule.  Red silk wraps hold a sterling rope hook keeper.  All silk wraps have gold thread pipping. The stripping guide is red agate. This blond rod casts with an ease and grace reflecting its past.
Bawdy Juneau cast 4 and 5 weight lines with ease.  My preferred line is Cortland’s Sylk 5wt floating line. The rod taper is modified from one I discovered on a scrap of paper in the back of a dog-eared copy of Garrison-Carmichael’s A Masters Guide to Building a Bamboo Fly Rod.  This found taper has become a favorite to build and fish. Little mysteries like the origin of the taper are part of a builder’s lore.
If fly fishing is your passion, fish beautifully.  Fish Bamboo. 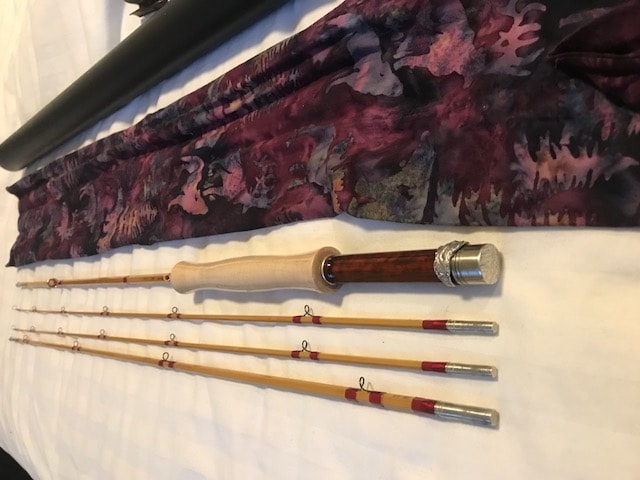